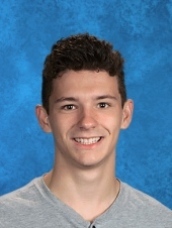 Original article by Rosalie Currier, at the Sturgis Journal

No one wants a teenager to be homeless. It usually means that life at home was rocky. Sometimes it’s parents’ choices that force the issue and other times, the teen’s, but either way it’s a hard story to hear

No one wants a teenager to be homeless. It usually means that life at home was rocky. Sometimes it’s parents’ choices that force the issue and other times, the teen’s, but either way it’s a hard story to hear.

Victor Carter, an 18-year-old homeless teen now living in Burr Oak, is proving homeless doesn’t mean hopeless. And while he’s classified as homeless, a caring co-worker and her family have welcomed him into their lives.

Victor freely shares his story. He tells how he changed schools at least 17 times in his 13 years of public education.

He tells how his father and mother were never together. His father is in prison and has been since Victor was 9.

Victor tells how his mother moved to the Upper Peninsula when he was 15 and said it would be best if he stayed behind.

That was when he called an aunt and uncle in Indianapolis who invited him to move in with them.

It was quite an adjustment, attending a large charter school, Victor said, but he was used to being the new kid and thrived at school. That was his sophomore year and when he started his junior year, Victor said it was good.

Not only was he making top grades, he had good friends and home-life was relatively stable. It got even better when his best friend became his girlfriend.

“It was too good,” Victor said. And soon everything hit the fan.

At home things got rocky between his aunt and uncle, both of whom were hiding different addictions, and by Thanksgiving, he was back on the street.

This time Victor’s father invited him to live with his step-mother. But that didn’t last. Although his father is in prison, he soon ordered Victor to move on.

Victor said he took the SAT test “while my dad was screaming at me. I walked into the classroom the first day of the SATs with tears running down my face for the way my dad was treating me. I could barely focus, but I did decently well — I don’t know how.”

When his dad finally told him to move out, Victor said, “I was alone.” “Homeless isn’t just that you’re on the street — out there starving,” he said.

“Homeless is when you’re independent — you’re on your own. You don’t have people financially, physically helping you.”

However, a co-worker invited Victor to live with her family. It’s the healthiest family life the high school senior can remember, and once again, he is thriving.

Through all of it, Victor has found caring adults in every school system and community who have encouraged and supported him.

While attending high school in Indianapolis, Victor discovered a love for writing. Kris Owens, administrator and coach in Burr Oak, learned Victor wanted to become a sports journalist. She gave his name to Corky Emrick, Sturgis Journal sports editor, who took Victor on as a freelance writer.

Victor tells his story without showing too much emotion, but when talking about his grandmother, Victor tears up.

“My grandmother — she wouldn’t have let anything like this happen to me, but she died when I was about 13. She taught me a lot of the things I know now. When I lost her — that was a big hit for me,” he said. “I have probably every excuse in the book to give up. To be partying and giving up on life and everyone would say, ‘He had a rough upbringing,’” Victor said. “But honestly that has been my motivation — to prove that I can be so much greater than I’m expected to be. I’m doing everything my parents said I couldn’t do.”

“When I got my first letter of acceptance I just cried tears of happiness,” Victor said. “When I make it to college and when I graduate it’s just going to be a huge stepping stone. No one expects the kid with no parents and no family to attend any college or be successful.”

How did he make it through?

Now as he looks forward to college, Victor said, “I have overcome so many obstacles in my life and I can look back and say, ‘I did it.’ I did it without the help of people who usually help.”

But with the help of many people who care.

"There are so many people who care about me now, I don’t feel alone," Victor said.